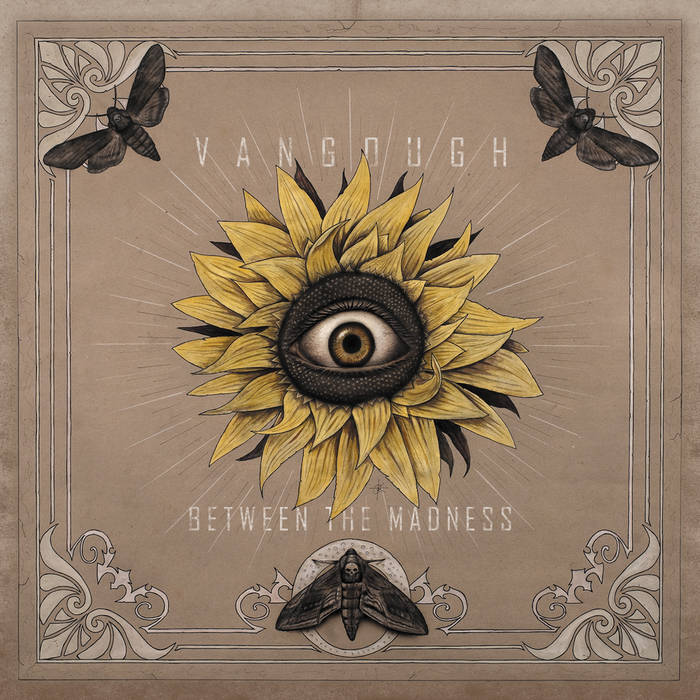 GraSell Excellent slice of Modern Prog including enough original flavours to stand out and keep you interested. Favorite track: Afterfall.

Between the Madness, available everywhere November 12th, is Vangough's third studio album and follow-up to the critically acclaimed Kingdom of Ruin released in 2011. Spread across twelve emotionally charged songs and topping out over 70 minutes of harsh textures and exotic flavors, fans will no doubt consider this a watershed moment in the band's career.

Coming off the heels of their sophomore CD, returning members Clay Withrow and Jeren Martin united with newcomer Kyle Haws on drums to begin work on a worthy successor. They entered Bell Labs in the summer of 2012 to record drums with longtime friend and engineer Sterling Winfield before returning to Clay's private studio where they tinkered away for the next several months.

Featuring a darker more unified sound, this album is a caustic and vicious spiral into the depths of human frailty. With tracks like "Infestation" and "Thy Flesh Consumed" pushing the boundaries of Vangough's tempestuous new approach to metal, Between the Madness is a stark contrast to the previous albums. It stands as a bold statement to where the band is heading, as well as a thought-provoking reflection on where they have been. With a greater emphasis on collaboration from bandmates Jeren and Kyle, Vangough were able to craft an even more distinctive style that focuses more on groove and feeling. In other words, this is the album fans have been waiting for.

Once again produced by guitarist/vocalist Clay Withrow, Between the Madness was an intentional move to mature the band's sound, both vocally and with the song's arrangements, into something that stood out among progressive metal releases. "I find that I don't listen to much music in our particular genre," explains Clay. "With that in mind, I wanted to make something that had its own unique flavor- apart from everything else that has come before us."

With the release of their third album, Vangough have stepped out of the shadows of their influences and delivered something emotionally outstanding and heartfelt. A lyrically poignant collection of songs that bravely pushes the band into an unexplored minefield of musicality. "Between the Madness is the most collaborative Vangough album to date," says Clay. "It took two albums to really mine the depths of what we could achieve and where we wanted to be musically but the end result is extremely cathartic." Releasing on November 12th, fans can order Between the Madness in a variety of formats including a 6-panel Digipak, which features the iconic eyeflower artwork from Rainer Kalwitz or as a 24-bit quality digital download, which is exclusive to BandCamp. Brave, eccentric and chemically unstable- it is time to step into the madness.

"These guys are the future of progressive metal and Between the Madness is the proof. 5/5" -Prog Rock Music Talk

"Easily my favourite progressive album of 2013." -My Global Mind

"If there’s anyone out there in the industry that’s looking for the next big thing in progressive metal, I would certainly have to say that Vangough have it. 9/10" -The Grim Tower

"Vangough’s “Between the Madness” is an album of stellar yet epic proportions, and will not disappoint fans of progressive rock and metal." -Explicitly Intense

“By far the best of the year, hands down.” -Razor Metal Magazine

"There has never been a better time to jump off of whatever progressive metal train you've been on and ride with Vangough." -Metal Underground

"I don’t think I need add more beyond declaring that Vangough has completely won me over. 5/5." -A Metal State of Mind

"It is easily the best that they have done. 5/5 stars." -Prog-Archives

"Vangough have stepped out of the box to produce something truly emotional. 93/100" -Rock Metal Essence

"One of the albums of the year." -Prog-Sphere

"A diverse collection of songs that are all exceptionally written." Bloody Good Horror

"The sheer volume of musical precision dealt liberally through this obstacle course of mayhem is flat-out awe-inspiring." -Oklahoma Gazette

"Between the Madness is, simply, a damn good rock album" -The Moshville Times

"BETWEEN THE MADNESS is another triumph for Vangough and is a strong addition to their growing musical legacy." -Metal Rules

"With its dire lyrical content and intriguing music, Between the Madness will be a challenging and entertaining listen for the prog metal fan." -Danger Dog Music Reviews

"This album is a keeper in every aspect. Essential in any progressive metaller library." -Perfect Prog

“A beautiful album with a lot of spice and variety.” –Lords of Metal

Brave, eccentric and chemically unstable. Vangough is a sunrise of melodic cocaine for your ears. A Pandora's Box of exotic flavors mixed with harsh textures that can only be described as human.

Bandcamp Daily  your guide to the world of Bandcamp